Recognized across Clayoquot Sound and elsewhere for his extensive work in conservation activism and consciousness-raising slideshows, Dan Lewis has dedicated his life to advocating for the forests and waterways of the beautiful British Columbia coast. In 2013, he founded Clayoquot Action, a leading conservation non-profit in the Sound. Dan’s legacy of environmental advocacy in the area, however, began long before Clayoquot Action was conceived – rather 30 years ago.

This legacy originated back in 1988 when Dan's now-wife and fellow activist Bonny Glambeck migrated from Alberta to a tiny island off the coast of Tofino to participate in the Sulphur Pass blockade. In 1991, Dan moved to Tofino and began working with Bonny towards Clayoquot Summer 1992, the action preceding the massive mobilizations of 1993. In that same year, Dan began doing public awareness campaigns, later joined by Bonny in 1996, that continue to this day. Both impassioned naturalists and skilled sea kayakers, Dan and Bonny decided to open their own kayak company in 2000, Rainforest Kayak Adventures, with a vision of offering sustainable and educational kayak tours. They ran the company together until 2010. In 2013, they founded Clayoquot Action, a frontline grassroots environmental activism organization that they continue to run to this day.

My background is teaching kayaking. I have spent countless days paddling the inlets and hiking the valleys. Getting out paddling feeds my soul and informs my work.”

The big shift for Dan came in 1990, when he embarked on a three-month circumnavigation of Vancouver Island. Paddling through hundreds of kilometers of coastlines and inlets, Dan was exposed to landscapes made dry and barren by the impacts and extent of clearcut logging. This sparked his intense involvement in the temperate rainforest conservation movement from 1990 to 1993. During this period, Dan worked tirelessly to develop maps of remaining coastal wilderness via kayak, and travelled across BC to raise awareness for the impacts of logging. This conservation work culminated with the mass protests of logging in Clayoquot in the summer of 1993 - the largest act of civil disobedience in Canadian history to date.

Through the late 1990s, Dan worked for several years assessing salmonid habitat in Clayoquot Sound. This included walking creeks, looking for fish, and studying the effects of clearcut logging on fish habitat. He has also done many 'snorkel surveys', swimming the larger river systems in the Sound to count numbers of salmon returning to spawn in autumn.

From the 1990s through the 2000s, Dan and Bonny continued to deliver their conservation messages across BC, presenting slideshows at Patagonia stores, and meeting with corporate consumers of BC forest products in Japan. In the last 10 years, the duo has turned to advocating more fiercely for the protection of Clayoquot Sound's wild salmon populations. Indeed, the risks posed to Clayoquot salmon populations are numerous, including logging-induced habitat destruction and the proliferation of disease from the salmon farms. Realizing these were reaching a critical level, Dan and Bonny decided to leave their company and dedicate their time and resources fully to conservation advocacy, founding Clayoquot Action in 2013.

​"Wild salmon are the backbone ​of the BC coast—a keystone species in the temperate rainforest ecosystem, and a key component ​of the economy here since time immemorial." 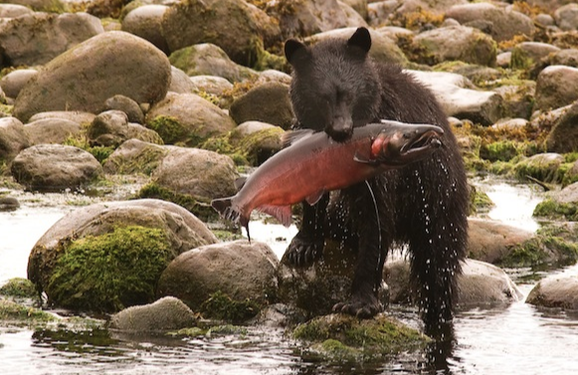 Clayoquot Action grew in momentum over the few years following its inception, broadly aiming to advocate for the Rights of Nature, Indigenous self-determination, and new forms of sustainable economic development in order to conserve the remaining pristine landscapes on Vancouver Island. According to their mandate, Clayoquot Action’s role in the community is to provide a voice for those community members who cannot speak—the wildlife and ancient cedars. Their goals are accomplished through public education, citizen research, and advocacy. ​

​Throughout his work, Dan continues to educate and advocate. ​He is hopeful for the future of Clayoquot Sound, and firmly believes that the communities of the Sound understand the value of conservation of Nature as a stepping stone to economic sustainability. This, he believes, will help put a stop to destructive industry practices - including logging and salmon farming - that have transformed the region.